Tanaka’s new work was showcased at Shibuya Art Festival on November 9 to 15.
Mainly there are four contents and one of them is directed by him.

Tanaka's "AST*RISK" will be screened at Stuttgarter Filmwinter in Germany.
[feb 6, 18]


Screening at the special program by FIVA

Tanaka's "OKEPASELA" will be screened at "The Night of the Museums" by FIVA in Argentina on November 4.
[nov 2, 17]

Tanaka's latest work, "AST*RISK" will be screened at Image Forum Festival 2017 in Japan. 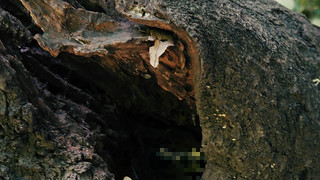 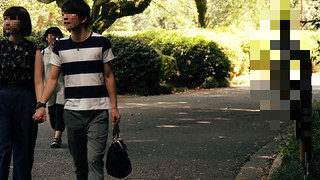 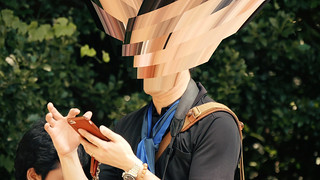 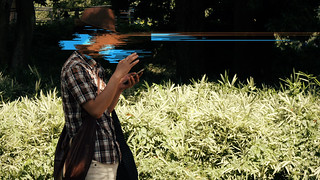 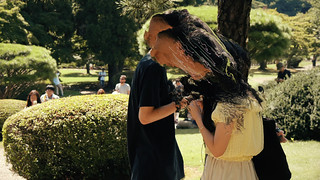 "Kaizer" will be screened at 28th Filmfest Dresden.

Tanaka will play vj at Last Waltz in Tokyo on March 17.
"Dance of the veil" will release a debut CD titled "Deep Blue" and perform live to celebrate the release.
details (in Japanese)
[mar 9, 15]

"Nancy & Henry" will be screened at The Incubate Open Film in Netherlands.
It'll be held on September 19.
[sep 4, 13]

Tanaka's latest work, "Nancy & Henry" has been invited at Image Forum Festival 2013.
It goes around Tokyo, Kyoto, Fukuoka and Aichi.
detail
[may 31, 13]

a short document of live performance held on November 5.

KLEX and a workshop at MMU

SVP2 which Kotaro Tanaka is a member of joined Kuala Lumpur Experimental Film & Video Festival.
We curated the program called "3.11". 18 artists made a 3min 11sec video each.
Also Tanaka had a workshop at MultiMedia University. He dealed with the theme "unseen world" and the students made a still or an drawing each for the theme.
[nov 30, 11]

DENIAL SHIRT & Kotaro Tanaka had an installation at BASE STATION HARAJUKU FLAGSTORE on October 21.
A short video document of it has been uploaded on vimeo.
[oct 26, 11]

Varfix will be shown at L'Étrange Festival in france on september 6.
it's included in the program 2.
[sep 6, 11]

atta presents "motion, fusion, reflection - a certain viewpoint of current film -" on september 3 in sapporo.
kotaro tanaka curates a program in which not only primitive films but progressive videos are included.
after screening keitaro oshima who is the host and tanaka will have a conversation.
[aug 16, 11]


IFF in fukuoka and nagoya

Varfix will be shown at vienna independent shorts.
the festival will take place from from may 26 to june 1.
[may 11, 11]

tanaka's latest work, "invain" will be screened at Image Forum Festival 2011.
in tokyo it'll be shown on may 2 & 5, in kyoto on june 8. the festival will travel throughout japan.
more details (japanese)
[apr 12, 11]

Varfix will be screened at Europian Media Art Festival Osnabrueck.
the program including my work is "into the dark". the entire program is here.
the festival will be held from april 27 to may 1.
[apr 4, 11]

Varfix will be screened at international festival of movement on screen in uk.
it'll be held from april 27 to may 1.
[mar 7, 11]

Varfix has been selected for inclusion in this year's competitive festival FLEX.
it'll take place at florida, usa from february 17 to 20.
[feb 11, 11]

more information of the screening of dotmov has been updated.
[jan 20, 11]

tanaka's work, Varfix has been invited to participate in the 40th International Film Festival Rotterdam.
it'll take place from january 26 to february 6.
[dec 23, 10]

from the other side: contemporary Japanese videos

lowave which is an independent dvd label in france presents verticalopolis at le festival de image ville.
kotaro tanaka's work, Deck will be screened there.
[nov 11, 10]

an information about new work, "In an aquarium" has been updated in filmo page.
[oct 13, 10]


screening in italy and malaysia

tanaka's latest work, Varfix will be screened at visionaria and Kuala Lumpur Experimental Film and Video Festival (KLEX).
visionaria will be held on between october 16 and 23, KLEX on october 22 to 25.
[sep 14, 10]

Malaysia-Japan Video Art Exchange (MJVAX) 2010 will be held in malaysia from july 20 to august 6.
MJVAX is a major project bringing together institutions, artists, videographers and multi-media experts
across malaysia and japan. it is anticipated to be a landmark event in VIDEO ART and NEW MEDIA linking both countries.
(excerpt from BSLN)
kotaro tanaka will perform live and lecture at some universities. also his works will be shown national gallery.
detail
[jul 17, 10]

filmography page has been updated.
an information of kotaro tanaka's new work, "Varfix" is there.
the movie itself and other informations of screening will come soon.
[mar 5, 10]

Kaizer has been invited for annexinema at nottingham, uk.
it'll take place on march 13.
[feb 18, 10]


Mornin' selected for a festival in france

BUREIKOU will take place at stripe's space on october 2&3.
five malaysian artists will come to japan to show their works and lecture at several universities.
kotaro tanaka will perform live with them.

experimental film festival, EXPERIMENTAL 3 will be held in osaka from october 1 to 9.
kotaro tanaka's work, "Deck" will be screened on oct. 3&7 at cine nouveau.
more details are on lowave & aqua metropolis osaka 2009 sites.
[17/09/09]

kotaro tanaka will vj at amate-raxi on october 11.

kotaro tanaka as bysexual team will play vj at womb on august 8.


A Document of "Fun On The Sumida River"

A Document of "Fun On The Sumida River" -playing golf on a river- has been uploaded on the filmo page.
many thanks wah and great associates!
[14/07/09]


fun on the sumida river - wah

kotaro tanaka's work, "Mornin'" has received a feature grade.
it's featured on the top of the page of the Minute Planet, One Minute World Festival.
[17/06/09]

kotaro tanaka has been registered by the IMDb (internet movie database) .

tomonari nishikawa and eriko sonoda sites are added to links page.
many thanks, nishikawa-san, sonoda-san!
[03/04/09]

kotaro tanaka's works will be showcased at SiCKL, malaysia on 1 april.
not only his works but also my associate's (hiroaki sato & katsuyuki hattori) ones screened.
also they'll discuss their works and activities in person.

hiroshi ashikaga's personal exhibition will be held at ophthalmologist gallery on 12 to 18 march.
kotaro tanaka cooperated with his video work.

kotaro tanaka's works, Kaizer & Loose Magnetic are archived in the video library p'silo.
anybody can consult them at videodrome (marseille).
[19/01/09]

Holidaze & Kaizer will be screened at Tokyo Eizo Brig. screening 2008 which will be held at kineattic on november 14 to 16.

kotaro tanaka has been showcased on souvenirs from earth.
[30/09/08]

audio visual event will be held at kawaguchiko stellar theater on october 4.
it's for freeeee!
kotaro tanaka will join it with takafumi tsuchiya and hiroshi kondo.


detail of the exhibition

new work will be shown at “unseen dimension” which will be held at ZAIM.
short synopsis is following:
Light - Years
12min. / color / stereo / HDV (on DVD)
Cinema has represented numerous pasts, presents and even unknown futures.
The concept of this work is a kind of unknown futures.

What are they listening to, talking about and gazing at?
Rather they may be doing something unexplainable by languages, somewhere several light years away.

kotaro tanaka will participate the event which will be held at ZAIM (yokohama, japan) on august 18th to 22th.
paintings, objects and moving images will be exhibited.
PDF
more details about his work will be announced soon.
[27/07/08]

Kaizer has been selected by the VAD international video and digital arts festival to enter the 2008 competition.
the festival will take place from october 15th to 19th.
[26/07/08]


broadcasting on souvenirs from the earth

Holidaze, Kaizer and Palette of Waves are broadcasted on souvenirs from the earth (Germany) on July 15th.
[14/07/08]

kotaro tanaka's new work, "Mornin'" has been uploaded.
it's a short short handwritten animation and its sound is composed by yusuke nakajima.
filmo page
[28/06/08]

finally AURORA Edition 1 has been released!
it's a unique compendium of thirteen new films drawn from the competition selection for AURORA 2007.
Kotaro Tanaka's work, Kaizer is included in it.
more details
[06/06/08]

max hattler & robert seidel are coming to japan.
during staying they will play audio / visual performance, exhibit their works, lecture and so on.
more details (pdf)
kotaro tanaka will play vj at exclusive tour launch party, le baron de paris on 23 april.
(entry not guaranteed for non-members)
thanks to max & robert!
[14/04/08]

AURORA on tour in march and april

Kaizer included in the program, "Erasure" will be screened at phoenix arts in leicester (the uk) on 25 march,
at the pushkin cinema in cheliabinsk (russia) on 23 and 30 march,
and at the old museum arts centre in Belfast (the uk) on 15 april.
more dates in the uk and elsewhere are being confirmed.
[20/03/08]


No F(r)ee included in the japan selection for the World One Minutes exhibition which will open
June 6 in the today art museum in beijing.
[07/03/08]


"Palette of Waves" uploaded to "filmo" page.
thanks, great performers!

it's reconstructed from live performance held at victor vldg. on november 30.
photos from the event uploaded to flickr.
[02/03/08]

vjing with takafumi tsuchiya at seco on February 8.
starts 22:00


AURORA on tour: Erasure took place in the Rodina Cinema in St.Petersburg
on 26 January and 2 February.
Kaizer contained in its program.
thanks.
[14/01/08]


"loop pool on ice" out now.
his work for this project included in.

it's a graw böckler project. in cooperation with michael heydebreck.
commissioned by the 53rd international short film festival oberhausen 2007.
thanks a lot, ursula & georg.
[28/12/07]

the schedule of the event at OVO changes to dec.21.
so sorry kotaro tanaka doesn't join it.


14th "BUREIKOU" ends.
thanks to great performers and filmmakers!
report on the event uploaded soon.
thanks.
[02/12/07]


"BUREIKOU" presented by SVP2 will take place at victor bldg. (tokyo) on 30/11 and 01/12.
on the first day, musicians and kotaro tanaka perform live!

on the other hands, kotaro tanaka presents foreign films selected by him from AURORA
which is international animation festival in norwich, u.k the next day.
more information here.(sorry...for japanese)
[20/11/07 ]


hi, there.
kotaro tanaka's website was launched.
informations about his works and activities will be introduced on this site.
thanks.
[07/10/07]